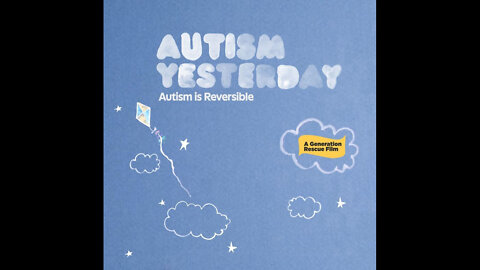 Autism Yesterday is a documentary that explores an emerging truth many parents are discovering: Autism is a reversible condition through a process known as “biomedical intervention”.

Through the eyes of five families and their recovering children, Autism Yesterday chronicles heart-wrenching stories of despair, hope, and recovery.

This 30-minute documentary puts an extraordinarily controversial topic into the hands of the viewer to decide, through the words of the families and affected children, where truth actually lies.

At a time when Big Medicine, Big Government and Big Media are trying hard to make the vaccine-autism debate go away, along comes a quiet little film like “Autism Yesterday” to throw a wrench in the establishment’s best laid plans to stifle the pesky vaccine chatter once and for all.

Anyone out there still declaring that this debate is over, that medical science has fully exonerated mercury and vaccines, and that thousands of parents who insist otherwise don’t know what they are talking about, really should watch THIS film before embarrassing themselves further.

In each story, we see clear before-and-after evidence of a child’s heartbreaking descent into the silent, baffling world of autism, and then their steady, sometimes miraculous progress back towards health, happiness, communication and, yes, recovery.

In each case, the parents explain how they turned to controversial “biomedical interventions” such as wheat and dairy-free diets, or the removal of heavy metals from the body, to treat their ailing children. And the film, in elegant detail, shows us exactly how far these kids have come.

Their progress stands in glaring opposition to all those “experts” who insist that neither mercury nor vaccines could possibly have anything to do with autism, and that biomedical intervention is nothing short of dangerous snake oil, bordering on child abuse.

Many of them, in the process, have denigrated, ridiculed and dismissed parents who are treating their children anyway. Such parents, the media tell us, are overwrought and hyper-emotional, they are desperate and distraught, confused and ignorant, even greedy and litigious.

But watch “Autism Yesterday” and you see and hear a different story – something I have come to know after speaking with thousands of parents in over 30 states: These tireless advocates for children are neither crazy nor stupid. Their thoughtfulness, intelligence, compassion and determination is what strikes us most.

Now, parents are insisting that biomedical treatments, in at least some cases, can virtually make autism go away. As one mother calmly explains about treating these kids: “If you don’t fix ‘em, who will?”